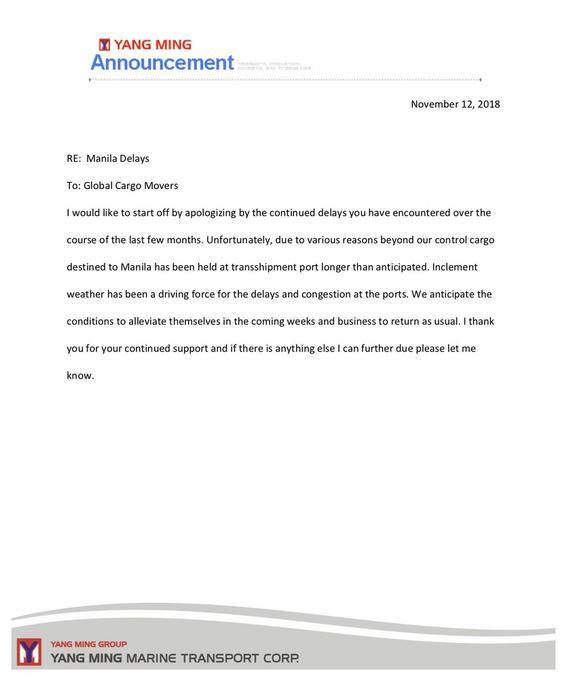 We don't just deliver, we deliver with care!

Please be advised that we are experiencing delays due to shipping line and port congestion.

As we all know the holidays are approaching, which means it is the peak season for the shipping industry.


There is a backlog in containers being released and arriving at our warehouses.

Due to these delays, this causes a backlog in our delivery of boxes because of the unexpected high volume of containers that arrive.

We average 5-7 containers arriving weekly at Cebu and Manila warehouses but because of the backlog we sometimes receive 8-10 containers at both locations at once.

We ask for your understanding in this situation as this affects the shipping industry of Philippines as a whole, most of all the Balikbayan Box.

Global Cargo Movers is doing the best we can to deliver your boxes in a timely, but more importantly, safe manner.

We have further increased our staff and equipment in order to cope up with the backlog.

In short, we at Global Cargo Movers assure you we will always continue to provide our secure and affordable services.


Because of the current situation of the ports and shipping lines, we will adjust and improve our processes in order to meet the expected deliveries for our valued customers and their families.

Thank you all for your continued, loyal support in our company as we approach our 10th year since establishing Global Cargo Movers, which core values is centered on providing our customers the best customer service.

Please see the articles below that further explain the status of the port congestion in Philippines.

The problem that has been plaguing Manila's ports since the beginning of this year is slowly starting to ease up, much to the relief of all affected and involved.

State-run Philippine Ports Authority (PPA) claims that they have now taken control of the situation, thanks in part to the toned-down rhetoric between the local government and the private sector.

In a recent report published by GMA Network (one of the country's leading news agencies), it mentions that last August 6th, Senators Francis Escudero and Paolo Benigno Aquino IV asked for a Senate probe on the worsening state of the two major ports in Manila.

The Manila International Container Terminal (MICT) and Manila South Harbor currently have a backlog of 73,500 container vans. There is also a backlog of 12,000 twenty-foot equivalent units (TEU) of empty containers – down from the previous 22,000 TEUs.

GMA also reports that the government's Cabinet Cluster on Port Congestion is also finding ways of decongesting the ports, including the opening up of additional empty container depots with close proximity to Manila's ports, such as a 10-hectare empty lot inside the CCP Complex to temporarily house empty containers bound to be collected by the international shipping lines.

The Office of The President of the Philippines has also approved incentives for shipping companies calling at the Port of Batangas in a bid to decongest Manila's ports.

The congestion was alleged to have been caused "mainly by the daytime truck ban imposed by Manila Mayor Joseph "Erap" Estrada in February of this year. The policy banned cargo trucks from main roads from 5am to 9pm, causing a backlog in deliveries to and from the ports."

Many speculate and believe, however, that the source of the problem lies much deeper in the system, and encompasses far more than what the talking heads of mass media and politics have been proclaiming.

In one of its reports, GMA News reveals that the problem is "actually rooted on lack of planning and foresight to accommodate the economic boom in the past ten years.

The Philippine economy has grown at an average rate of 5 to 5.5 percent over the past decade, according to British banking giant Hong Kong Shanghai Banking Corporation (HSBC) Limited.

"The robust economic growth was driven by the manufacturing and services sector," the Philippine Statistics Authority (PSA) said.

Further to the statement of the PSA, Philippine exports have been reported to have increased in June by 21.3 percent to $5.444 billion from $4.490 billion a year ago.

Socioeconomic Planning Secretary Arsenio Balisacan remarks on the statistics - "the export gains are broad-based, as reflected by increased overseas demand for manufactures, mineral products, agro-based, and forest products. This also indicates that the global economy is ready for a strong recovery."


"Our overall outlook for Philippine merchandise exports continues to be optimistic in view of favorable expectations on the global economy for the rest of 2014, particularly on the growth prospects of advanced countries such as the USA and the Euro Area," said Balisacan.

"Ten years ago, the PCCI warned of a port congestion taking place," he said.

"About five years ago, we asked the Bureau of Customs (BOC) to bid out the empty containers that have been piling up in the Manila ports, but nothing happened," said Ortiz-Luis who is also president of the Philippine Exporters Confederation (PhilExport).

"To resolve the port congestion, government must fast-track the transfer of empty containers to other under-utilized ports," Ortiz-Luis said. He noted that the process is way too time consuming, and that the best way to move containers is not by using trucks, but by using barges instead.

Earlier this month, Trade Secretary Gregory Domingo said government "is taking measures to ease congestion but it may take a month to decongest the ports. The measures include transferring empty container vans to the ports of Subic and Batangas and opening BOC warehouses during weekends."

This past Wednesday, Manila port operators spent P14 million to ship 3,000 container vans to Subic. "If the port congestion is not resolved quickly, it will have a domino effect on prices of goods, business sentiment and economic growth," economists said.

"Problems are starting to pile up, that's why government should act quickly," Ortiz-Luis said to GMA News Online.

While a final solution is still up in the air, the good news is that the problem is coming from a good place. The country's growth numbers are strong, and are not expected to slow down anytime soon. With a steady improvement in port management, the country will - hopefully and eventually - be able to leverage the full potential of its import/export numbers for continued economic growth.

Senator Aquilino Pimentel III expressed concern yesterday over the current congestion and inefficiency at the port of Manila which is is causing the loss of billions of pesos in revenues every day.

Pimentel said he would summon officials of the Bureau of Customs (BOC) to explain and account for the “slower movement and longer delays” in the release of merchandise arriving at the port of Manila.

Pimentel, who chairs the Senate trade, commerce and entrepreneurship committee, said he has been receiving a growing number of complaints from importers, traders, truckers and brokers groups, as well as Overseas Filipino Workers (OFW) associations about the worsening congestion at the Manila Port.

“Vessels now take around four to five days to berth at the pier. After berthing, it takes around two to three days to unload containers at the yard. So it takes seven to 10 days to unload a container. The longer these containers stay unreleased, the higher the added storage charges are incurred, which are eventually passed on to us consumers. That’s only one problem,” he noted.

Consumer and OFW groups in particular, Pimentel stressed, pointed out the “longer time it takes these days to release ‘balikbayan’ boxes.”

“I want to hear solutions from Customs officials and other stakeholders. Port congestion is a serious threat to the economy. We don’t want a slowdown in commerce this coming Christmas season all because volume may have to be scaled down as a result of inefficiency in our ports, in Manila in particular,’’ he pointed out.

Pimentel explained that a more comprehensive solution to the port problem needs to be formulated to address congestion.

“Some years ago, several banks at the Manila Port extended their operating hours to accommodate clearance payments for shipments. At this point, however, we need bigger, more long-term solutions. For example, we simply cannot rely on truck bans anymore. We need dedicated roads linking the port to our skyways and expressways,’’ he said.

He, likewise, suggested eventually de-clogging the capital’s operations and expanding alternative gateways in Subic and Batangas.

“This serious national economic matter may require Senate intervention in first, probing the problem further, and second, in bringing about solutions through an inquiry called for such purpose. We need the BOC to urgently shed light on these issues,” he added.